Documented Evidence for Moses and the Exodus

MOSES THE HIGH PRIEST OF AMEN AND A VIZIER OF NORTHERN(UPPER)EGYPT
IS IN A POWER STRUGGLE WITH THE PHAROAH
In this story we find “Mose” responsible for the death of an Egyptian official and in a position of power and influence.
He is a leader/member of a religious faction attempting to take the Pharoanic throne.
He fails and is driven out of Egypt by the successful Pharoah
THE STORY OF MOSES IN EGYPT
the chief foreman of Deir el-Medina, a certain Neferhotep, was killed in the reign of king Amenmesse on the orders of a certain ‘Msy’ who was either Amenmesse himself or one of this king’s agents, according to Papyrus Salt 124
http://en.wikipedia.org/wiki/Papyrus_Salt_124
Neferhotep, one of the two chief workmen of the Deir el Medina necropolis, had been replaced by Paneb, his troublesome son-in-law. Many crimes were alleged by Neferhotep’s brother—Amennakhte—against Paneb in a violently worded indictment preserved in papyrus now in the British Museum. If Amennakhte’s testimony can be trusted, Paneb had allegedly stolen stone from the tomb of Seti II while still working on its completion—for the embellishment of his own tomb—besides purloining or damaging other property belonging to that monarch. Paneb was also accused of trying to kill Neferhotep, his adopted father-in-law, despite being educated by the latter and after the murder of Neferhotep by ‘the enemy,’ Paneb had reportedly bribed the Vizier Pra’emhab in order to usurp his father’s office. Whatever the truth of these accusations, it is clear that Thebes was going through very troubled times. There are references elsewhere to a ‘war’ that had occurred during these years, but it is obscure to what this word alludes, perhaps to no more than internal disturbances and discontent. Neferhotep had complained of Paneb’s attacks on himself to the vizier Amenmose, presumably a predecessor of Pra’emhab, whereupon Amenmose had punished Paneb. This trouble-maker had then brought a complaint before ‘Mose’ (i.e.: ‘Msy’), who then acted to remove Pra’emhab from his office. Evidently this ‘Mose’ must have been a person of the highest importance, perhaps the king Amenmesse himself or a senior ally of the king.
THIS FACTION LOOSES THE POWER STRUGGLE TO NORTHERN PHAROAHS
THE RISE OF THE PHAROAH SEKNAKHTE IN THE NORTH
“He was Khepri-Set, when he is enraged; he set in order the entire land which had been rebellious; he slew the rebels who were in the land of Egypt; he cleansed the great throne of Egypt; he was ruler of the Two Lands, on the throne of Atum.
James H. Breasted, Ancient Records of Egypt, Vol No.4,(1906), pp.198-199
THE PHAROAH SEKNAKTHE EXPELLS THE ASIATICS (SEMITES) 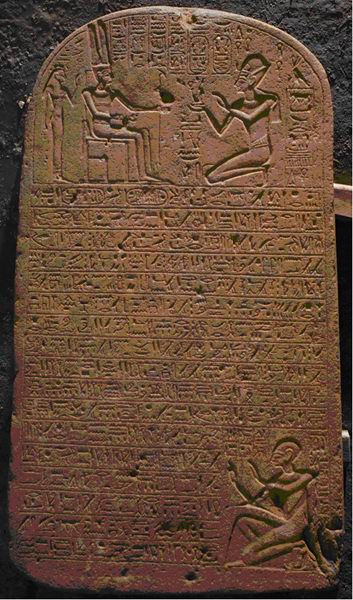 pharaoh Setnakhte presents an offering to the god Amun

A MAJOR PLOT TO BRING THE HYKSOS SET WORSHIPPING (AS MALE FERTILITY/CANAANITE) PHAROAHS BACK BUT UNDER PRIESTLY AMEN RULE.
IS DEFEATED BY THE EGYPTIAN SET WORSHIPPING (AS HERO OF RA/EGYPTIAN) PHAROAH
Setnakhte’s royal Elephantine stela on the island of Elephantine
“from the second (?) year of Pharaoh Sethnakht, founder of the XXth Dynasty …, dating in absolute chronology from the first or second decade of the 12th century B.C.E. …, the political situation in Egypt … was marred by the enigmatic intervention of Asiatics … who were approached and bribed by a faction of Egyptians … who revolted against another faction … who remained loyal to Sethnakht.”
Sethnakht overcame the plot and drove the Asiatics from Egypt.
THERE ARE MANY BIBLICAL SIMILARITIES
Setnakhte’s Elephantine stela touches on this chaotic period and refers explicitly to the expulsion of certain Asiatics, who fled Egypt, abandoning the gold which they looted from Egyptian temples behind. Setnakhte identified with the God Atum or Temu, and built a temple to this God at Per-Atum (Biblical Pithom)
The Papyrus Harris I also describes “the Syrian-Palestinian usurpation of Egypt” as well as the “desolate conditions” that held sway prior to Ramses III. According to the papyrus, the Asiatics were led by “someone called Irsa,”
There is a strong resemblance between the items offered as bribes by the rebels to the Asiatics in the Levant and the items described in Exodus taken by the Israelites from the Egyptians:
“And it shall come to pass, that, when ye go, ye shall not go empty; but every woman shall ask of her neighbor, and of her that sojourneth in her house, jewels of silver, and jewels of gold, and raiment; and ye shall put them upon your sons, and upon your daughters; and ye shall spoil the Egyptians.”
BUT IT DOES SEEM THEY MANAGED TO RUN OFF WITH A “WAS SEPTRE” (SET STAFF/ ROD OF AARON)
BUT THEY HAD TO MAKE A NEW CHEST OF ANUBIS(ARK OF THE COVENANT)

NON-EGYPTIAN EVIDENCE OF AN EXODUS
Apion (20s BC – c. 45 AD), Graeco-Egyptian grammarian, sophist and commentator on Homer, was born at the Siwa Oasis, and flourished in the first half of the 1st century AD, identifies a second exodus mentioned by Manetho when a renegade Egyptian priest called Osarseph led 80,000 “lepers” to rebel against Egypt at the end of the 19th Dynasty (12th century). Then Apion additionally combines these with the Biblical Exodus, even alleges that this heretic priest changed his name to Moses.

SET BELIEF IS DEMONISED BY THE 20TH DYNASTY
Sepermeru is perhaps of most interest to modern Egyptologists because of its status as one of the chief ancient Egyptian cult centers of Seth, along with the cities of Ombos, Nagada, and Avaris . It is thought that the cult of Seth waned considerably after Dynasty XX, due to the increasing “demonization” of this deity and his association with territories and priorities increasingly considered foreign to the general interests of Egypt.
Throughout history Seth’s reputation grew steadily worse, until he became Seth, the abominable. In the Book of victory over Seth the god is expelled from Egypt. Magic is invoked against him, his effigy is burned, and he is delivered to the Devourer. Even his mother Nut is driven to repudiate her son:
They are expelling (you, who) is of evil disposition
and throw you in your badness into the land of the Asiatics.
Egypt, loyal to Horus, organized your slaughter;
your grief is repeated. They deliver you to the Devourer.
http://www.reshafim.org.il/ad/egypt/texts/victory_over_seth.htm
BY THE 22ND DYNASTY ALL REFERENCES TO SET ON TEMPLES HAD BEEN REPLACED
By the 22nd Dynasty, Set was equated with his old enemy, Apep, and his images on temples were replaced with those of Sobek or Thoth. a late inscription in the Ptolemaic temple of Horus at Edfu makes reference to “Seth of Sepermeru,” albeit with an insulting caveat that the god’s canals in this district had become “dried-up and useless” (cf. P. Wilson, A Ptolemaic Lexikon, p. 827).
Most modern popular misconceptions of Set come from Plutarch’s secondary source interpretations of Set (via the writings of Herodotus et al.), long after Set’s demonization (circa 100 A.D., Roman Period in Egypt).

SO WHAT WE HAVE HERE IS…
MOSES A PRIEST OF AMEN/SET
FAILS TO PLACE HIS MAN ON THE THRONE AND IS RUN OUT OF TOWN
BTW
MOSES SEEMS TO BE AN AMEN/SET POLYTHEIST
AND IT WAS THE HYKSOS MISRULE AND THIS LATER INVASION THAT LEAD TO THE GOD SET BEING EXPELLED AND EXCORSICED FROM EGYPT
WITH THE EXPULSION OF THE GOD SET OUT OF EGYPT AND INTO CANAAN
WE SEE IN CANAAN, THE BIRTH OF THE “POLYTHEISTIC” KINGDOM OF ISRAEL

the “sons of God” who appear in Genesis 6:2 are identified as the children of Seth(Set), and the “daughters of men” as women descended from Cain(Canaan), who successfully tempt most of the Sethites to come down from their mountain and join the Cainites in the valley below, under the instigation of Genun son of Lamech.
href=”http://en.wikipedia.org/wiki/Conflict_of_Adam_and_Eve_with_Satan”>http://en.wikipedia.org/wiki/Conflict_of_Adam_and_Eve_with_Satan
THIS IS THE BIBLICAL EXODUS
THIS IS WHY NO-ONE EVER MENTIONS THE EGYPTIAN GOD SET AND HIS FALL AND EXPULSION FROM EGYPT
FOR THE FULL STORY CHECK
THE INVENTION OF ABRAHAMIC MONOTHEISM PART 1
THE INVENTION OF JUDAISM
https://cuthulan.wordpress.com/2009/09/02/the-invention-of-judaism/